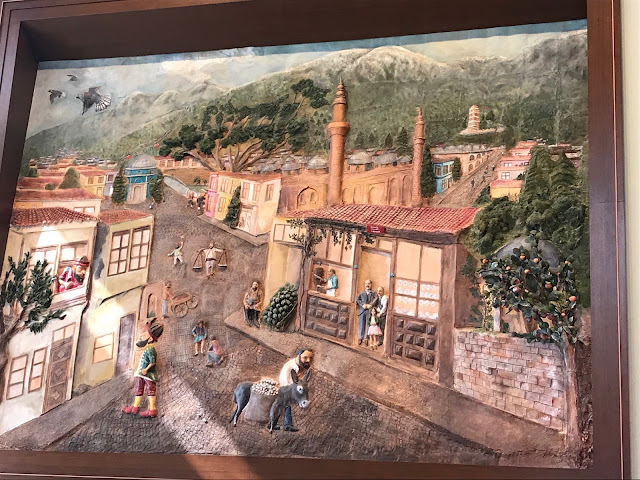 Hello, guys. This is Arca, and I will be writing about the final week of my annual Turkey trip. I wrote a post that covered the first two weeks of my trip, about Ankara and Bodrum. You can see that here: http://www.arcabaran.com/2018/08/turkey-trip-2018-weeks-1-2-ankara-and.html

This post is ridiculously, hilariously, extremely delayed, as you may have noticed. But that's for a good reason, which I will get into at the end of the post, so read on if you're curious. Anyways, on to the main part of this post!
So, a quick recap of what happened leading up to our third week: We stayed in Ankara, the capital city, first, for a week to stay with my mom's side of the family. Then we spent another week in Bodrum, at a beach resort. Finally, we went to Yalova, across from Istanbul, and that is where the final week of our Turkish adventure begins...

The first few days, I found myself in my grandma's house, an apartment where both she and my uncle Zafer were staying. I spent my days in typical Turkish vacation fashion: Traveling back and forth between my family member's apartments and homes, eating Turkish ice cream and snacks, and whenever I was idle, reading books or playing video games. It was only until we got a bit further into the week that things got much, much more interesting.

Yalova is somewhat close to Bursa, where more of my dad's side of the family lives. Usually, they occasionally visit each other for short amounts of time, because they live relatively close to each other, and meeting each other is easy (not like how it is with us, since we live on the other side of the world, here in New Jersey). Meeting each other sometimes ends up like a game of tug-of-war: We might be in one place, while they are all the way in the other. This year, however, was different, since we had arrived just in time for Eid.

Eid is the perfect time to be together with family, and that's exactly what we did. We all came together in my grandma's apartment building, and what a sight it was: A huge crowd of 19 people, all drinking tea, conversing familiarly, and preparing food... in just the space of about two apartment rooms!

Eid is always one of my favorite times of the year (along with my birthday) since it just makes me so happy. My entire family, who I barely get to see in person, all in one place! Enormous, delicious meals, collecting gift money from grown-ups, and playing Mario Kart with my cousins remain the other highlights of this time of year.

Speaking of my cousins, I got to see all of them again this year. My Uncle Muzaffer and Aunt Ayse have three kids: Ahmet Emre, who is two years younger than me, Omer Faruk, who is 2-3 years older, and Selim, who is slightly younger than Onur. Playing together with them is also one of my favorite parts of my Turkey trip. They all have similar personalities to us (not surprising, since we're related). We do things such as play indoor soccer (while trying not to trip on our socks or bust a window), play Minecraft (this year, I was finally able to utilize cross-play, so that means that we could play together regardless of what device we were using), and just hang out.

Last year, we gifted them two Nintendo 2DSes, which came with Mario Kart. I like the 2DS, after owning one myself, and its cheap price-tag, great games library, and nearly-indestructible build quality all add to the appeal. It was perfect for them: We could play Smash Bros together, they probably wouldn't break it by accident, and getting new games would be cheap and easy. Plus, they wouldn't feel so left out seeing us play Zelda: Breath of the Wild  (the best game of all time) on our Switch, when they have Zelda: Ocarina of Time on their 2DS (also highly regarded as one of the best games ever). Of course, they didn't just play on their 2DS, since it was lacking one big game: Minecraft.

Yes, whether you like it or not, Minecraft is actually a great family game. It is easy to get into, fun to play together with whomever you please, and its open nature means that you can do practically anything you want with endless possibilities. Plus, it is available on every platform imaginable and supports crossplay (sorry PS4 owners), so I was able to use the superior controls of my Switch to play a round of Murder Mystery with my 8-year-old cousin, who was using an iPad. I even friended them online, so every once in a while on the weekend (as long as I check the time zones), I am able to play together with them on servers. That's right: Me, in America, and them, all the way to the other side of the world, fully connected and playing Sky Wars together on different devices! Sorry to go off on such a tangent, but I absolutely love the fact that the Internet age has let us do these sorts of things we haven't been able to do before, even extending its way to family get-togethers. God bless Bill Gates.

Then there is also my Uncle Zafer's kids (who are all grown up, so I can't even accurately label them as "kids"): Mehmet, Fatih, and Seda. Mehmet got married last year to a girl named Esra, who is now my new aunt, so this Eid was the first time we got together as a full family. Fatih and Seda live with my Uncle Zafer and Aunt Semra. Fatih used to have a pet bird, but it flew away. His bedroom is still the same in every other way that I remember it: Full of Turkish musical instruments that look similar to a flute (but whose name I can't recall), and formerly a gaming PC. He was quite interested in our Nintendo Switch and was amazed that such a small device could handle a game like Paladins. He even played a few rounds of both Paladins and Splatoon 2 (having somewhat of a difficulty mastering the latter) and spectated us playing Zelda and Donkey Kong Country: Tropical Freeze. Both Fatih and Seda share a friendly and funny personality.

Besides making an hourly visit to the second floor of the apartment building (my Uncle Zafer's room had WiFi, while my grandmas did not), our cousins and us would also drive to Bursa, where my Uncle Soner lives. It is also the location of the new home of Uncle Muzaffer's family, whom recently moved to a new house. Uncle Soner's apartment is quite interesting, and a highlight by itself: A big penthouse at the top of his apartment, complete with a staircase, and even an outdoor balcony/garden. It got featured in a Turkish home decoration magazine once, and I can clearly tell why. This is where my Uncle Soner, Aunt Nermin, and cousin Yegit live.

They also live together with someone, or rather, should I say something, else. No, it isn't a person: It's a cat, named Ipek. Ipek means "silk" in Turkish, and if you ever see her, you will clearly be able to tell why: Her fur is as white as clouds, and it is very long, soft, and fluffy. I have seen Ipek every time I have come to Bursa within the past few years. She is relatively young, but I only recently found out that I am allergic to cats. I took an allergy test last fall (after I came back from last year's Turkey trip), and ironically enough, I was allergic to just about every single non-food substance that they tested me for. A bunch of trees and grass, unsurprisingly enough (it would explain my outdoor misery during the springtime), but more surprisingly, both dog and cat fur. From a scale of 1-4 (4 being the worst), cats were a 4, while dogs were only 2! I mean, I always had gotten slightly itchy near Ipek, but the dog result completely caught me off guard. Again, the chances of me getting a cat before I leave to college are about as likely as Waluigi being a playable character in Super Smash Bros. Ultimate. It's not impossible, and I want it to happen, but it's not at all likely.

Ipek, after a day or so of ignoring Onur and me, finally recognized us from previous years, so she was less shy around us. She would actually go up to us and let us pet her, rather than retreating to the underside of a bed as soon as she caught a glimpse of us. Ipek is alone in Uncle Soner's house when it comes to other animals, but it wasn't always that way. Believe it or not, Soner used to have some other pets in the same apartment: Two turtles. One of the turtles is named the Turkish word for "Pirate", while I completely forgot the other's name. The most memorable things that they ever did (other than swim around lazily in their tiny habitat) was spending every waking hour trying to escape their miniscule, boring, and limited confines of the plastic drawer they lived their entire lives in. Whenever they weren't sleeping, or playing with Ipek (which was actually just them walking around lazily on the carpet while the cat chased after them or cuddled with them), they were sticking their tiny green heads out of their shells and trying to crawl out of the tank using their stubby little arms. Unsurprisingly, their attempts were always futile. It's a good thing that this year, my Uncle Soner decided to put an end to their boredom and set them free in a local pond. Now, they can finally live life the way they were intended to, and without a plastic barrier.

I left from Turkey after a week in Bursa and Yalova, and embarked on another 9-hour flight from Istanbul to New York. I watched the movie adaptation of Ready Player One (a book I finished reading during my Turkey trip and loved thoroughly), a bit of Captain America: Civil War, and played some Zelda: Breath of the Wild on my Switch, before arriving in JFK International Airport. And boy, what a night it was. By the end of our 2-hour taxi ride back home, I was absolutely starving, so I ended the day with some cheesesteak pizza from Dominos and a long and satisfying slumber back in the bedroom of my sweet, sweet home. While Turkey was undoubtedly a great three-week long vacation, beach stay, and family reunion all in one--- It still was good to be back in New Jersey.

This is Arca, signing off.