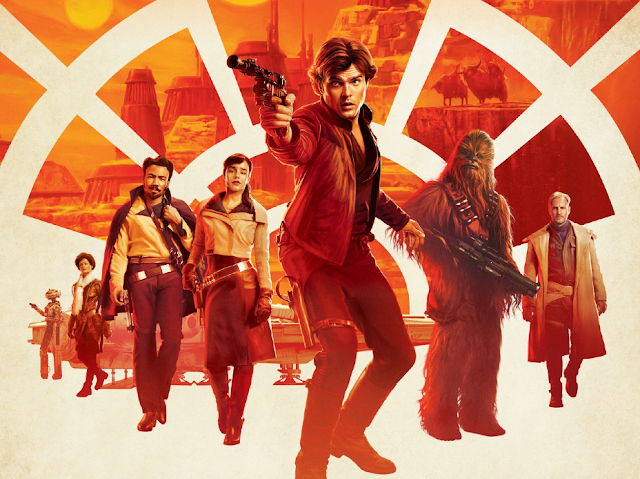 Last weekend, I watched "Solo: A Star Wars Story" (the Han Solo origin story) for my little brother Onur's birthday party together with our friends Ali and Burak. As with every other new Star Wars movie, I am going to write a review of it. So, without further ado, let's begin!

Keep in mind, while this review refrains from mentioning any major spoilers that would ruin the movie for anyone watching it, it isn't entirely non-related to what happens in the movie. I will mention some basic plot details, as well as summarize the exposition of the story. So if you are the person who doesn't ever watch movie trailers and wants to go into a movie knowing almost nothing about it, then this isn't the review for you. Otherwise, feel free to keep reading this. Now, I will summarize the very beginning of the movie.

When the movie starts out, we see a young Han performing one of his first heist jobs on the streets of his home planet Correlia. Together with a girl named Kira (who I'm assuming is his girlfriend, because the movie didn't really explain who she was), they steal a piece of the extremely valuable material coaxium (which are metal cylinders full of blue energy). This pisses off a fish crime boss, who immediately sends a bunch of his (or maybe her) henchmen after the two, while they engage in a high-speed hovercar escape.

They find themselves in an Imperial spaceport in their reckless attempt to escape the henchmen. Han sees a piece of Imperial propaganda along the lines of "I Want You!" (with some determined finger-pointing by Uncle Vader, not Uncle Sam), and this gives him an idea. So, in the heat of the moment, he gets in line with Kira to join the Imperial Academy to hide from the bounty hunters who have put a price on his head.

However, his plan doesn't go quite the way he expects, and after the Imperial Academy admissions officer discovers that he has stolen coaxium, he is separated from Kira and forced into stormtrooper duty. During his first battle, things don't go so well due to his rebellious attitude and constant questioning of the Empire's cause ("How are we 'bringing peace and order to the galaxy' by attacking a planet that isn't ours?') He is soon fired from his job as a stormtrooper, and as punishment, they throw him into the "Monster's Pit". Guess who that hairy, growling "monster" happens to be?


He somehow finds a way to befriend Chewbacca, who at the time was a very aggressive Wookiee indeed (I won't spoil how they became friends, just watch the movie yourself to find out). Together, Han and Chewie escape the pit and are rescued by Beckett. Beckett is Han's Imperial boss, whom Han finds out was just in it for the money all along.

Beckett tells them he is putting together a crew for a notorious gangster and wants them to join. Although he is hesitant at first, Han eventually agrees, and together with Beckett, Chewie, and Dryden Vos (she is the leader of their crew), they perform a daring train heist of coaxium on the snow planet Vandor.

Just like any other plan that Han Solo is famous for, it goes wrong in one way or another. They backtrack a little bit after finding themselves face to face with the group of space pirates called the Cloud-Riders, who attack them to try to stop their heist.

They still manage to steal the coaxium, however, and this encourages them to heist (yet again, I know). Noticing a pattern here? So they decide to try out doing it on the planet Kessel, famous for its smuggling route that always took 17 parsecs to complete. Guess who decided to try to break that record?

In order to make the Kessel Run as efficiently as possible, Han needs the best ship possible. And that would be the Millenium Falcon, which at the time was being owned by his future-frenemy, Lando Calrissian. In order to win the ship from Lando, Han must beat him in a game of cards called Sabacc.

Will Han be able to claim the Falcon for himself? How does he get his nickname "Solo"? Will their heist go as expected? Will Han finally see Kira again? Or will the odds not be in his favor, resulting in a criminal goose-chase for him with just about every bounty hunter in the galaxy putting a price on his head? As Han Solo says, "Never tell  me the odds!" But if you really want to know, I suppose that you should go watch Solo: A Star Wars Story in theaters yourself!

So, what did I think of the movie? I felt very positive about this actually. While I have been a huge fan of the Disney-era Star Wars movies so far (unlike some other people), what I saw from the trailers for this movie didn't appear to be as good of a movie as I was desperately hoping a young Han Solo movie to be. Thankfully, this movie went against my expectations in terms of quality. In terms of storyline, though? I would have to say that it was pretty straightforward and unsurprising. There is everything that you could possibly expect a Han Solo origin story to include. How he became such close friends with Chewie? Check. How he met Lando? Check. How he got the Millenium Falcon? Check. Even the seemingly meaningless question of "How did he get his blaster?" is answered. The plot is decently predictable right from the start. However, none of this makes Solo a bad movie.  It is very entertaining and full of action-packed scenes throughout. There are loads of funny moments, and it will make you laugh quite often (but it's still not the funniest SW film). The visual effects are dazzling, and despite all the behind-the-scenes mess of reshoots and director changes, I was surprised that none of this is obvious when you are watching the movie.

I can tell that, first and foremost, this is meant to be a fan-service movie. Sure, the story is fine, and so are the new characters, but there is also an overwhelming amount of what is familiar. There are so many easter eggs and references hidden throughout that die-hard Star Wars fans will surely notice, even on their first-watching of the movie. This movie also has plenty of references and similarities to the Star Wars EU (AKA Legends), and fans of the Expanded Universe will be happy to know that Han's origin story here is somewhat similar to the one there (there is even one particular "SW Holiday Special" character thrown in there for good laughs). Everything from the Kessel Run, Holochess, and one particular surprise cameo (which I won't spoil for you), is meant for those fans who can brag to their other moviegoers, "I know something that you don't." But seriously though, that cameo at the end will have everyone who has watched the Star Wars TV shows (Clone Wars and Rebels) to be screaming out loud with excitement. Everyone else, though, will just be very confused about it.

Now to talk about the characters. Han, Chewie, and Lando act just the way that audiences have come to know and love. The new characters, though, I felt were mostly pretty boring. They were weakly written with little to no substance or story arc to them. The one exception to this, though, is Lando's droid L3-37 (voiced by Pheobe Waller-Bridge). She has more personality than even Rogue One's K2-S0, and is a self-made robot constantly fighting for "droid equal rights". Alden Ehrenreich's performance as a young Han Solo is solid, but it doesn't quite match the rogueish scoundrel played by Harrison Ford. The real star of the show, though, is Donald Glover's portayal of Lando Calrissian. Lando is just as smooth, cunning, and clever as you would expect, and Glover's acting does a great job of bringing him to life.

In conclusion, Solo: A Star Wars Story is a prequel that takes its pride in delivering plenty of fan service, without oversaturating a franchise that is already jam-packed with seemingly too much content (as the low box office numbers for this film prove). While its plot is very straightforward and its new characters aren't so memorable, it still manages to be an entertaining, fun-filled watch that answers all the questions about Han Solo's life that someone could possibly ever care to ask (even though it disappointingly lacks in information about his childhood). Ehrenreich's acting of Han Solo doesn't quite match Ford's, but Glover's Lando evens the two performances out in the end. While I feel safe in saying that this is the worst of the Disney Star Wars movies so far, it is highly recommended for anyone who is a fan of Han Solo as a character (or Chewbacca, or even Lando) should watch this movie. Seriously, though, just watch it. I mean, so far this movie hasn't been selling so great (a stark contrast from the billion-dollar revenues generated by the previous three modern SW movies), and I really want Lucasfilm to continue making spin-off movies like these. It would be awesome to learn more about characters like Obi-Wan, Yoda, and Boba Fett in their own separate movies, and it seems like the folks at Disney are getting quite discouraged at the moment at the statistics for Solo.  So, for the sake of seeing more spin-off SW movies happen (and just for the sake of having a great time watching a movie), please go and watch Solo: A Star Wars Story. I would rate it 4.4 out of 5 stars, or 88%.

Here is my review of The Last Jedi, from 2017: http://www.arcabaran.com/2017/12/star-wars-last-jedi-movie-review-mostly.html

Here is my Review of The Force Awakens, from 2015: http://www.arcabaran.com/2015/12/star-wars-force-awakens-movie-review.html

Here is my previous post, in which I make a detailed review of the Nintendo Switch: http://www.arcabaran.com/2018/05/nintendo-switch-review-blog-upgrade-81.html

See you next time! BBBYYYYYEEEEEEEEE!!!!!